Cannabinoid May Be First Drug for Sleep Apnea 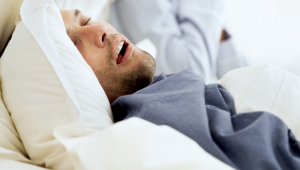 Dronabinol, a synthetic form of the cannabis compound tetrahydrocannabinol (THC), shows efficacy in the treatment of obstructive sleep apnea, possibly representing a first pharmacologic approach to the tough-to-treat, but potentially serious, condition.

“These findings support the therapeutic potential of cannabinoids in patients with obstructive sleep apnea,” the authors, led by Phyllis Zee, MD, the Benjamin and Virginia T. Boshes Professor of Neurology at Northwestern University Feinberg School of Medicine and director of the Northwestern Medicine Sleep Disorders Center, Chicago, Illinois, write.

The study was published in the January issue of Sleep.

With no approved pharmacotherapies available for sleep apnea, current first-line treatment is a continuous positive airway pressure (CPAP) device that applies continuous air pressure to keep the airways open during sleep. Though effective, the device can be cumbersome to wear, and long-term adherence is low.

Dronabinol, specifically a synthetic formulation of the molecule delta-9 THC and a nonselective cannabinoid type 1 and typ2 receptor agonist, was first approved in 1985 by the US Food and Drug Administration (FDA) for the treatment of nausea and vomiting associated with chemotherapy and is also indicated for appetite stimulation in AIDS-related wasting syndrome.

In previous studies involving rodents and a small pilot study of 17 humans, however, the authors of the current study noted that dronabinol also showed some signs of reducing spontaneous sleep apneas.

To expand on this research in the multisite, phase 2 Pharmacotherapy of Apnea by Cannabimimetic Enhancement (PACE) study, the authors enrolled 73 adult patients with moderate or severe sleep apnea.

No significant changes were observed in the placebo group after adjustment, and the differences in improvement between the 2.5- and 10-mg groups were not statistically significant.

The 10-mg group also showed a significant reduction in the secondary primary endpoint of subjective daytime sleepiness, assessed by the ESS, with a reduction of 3.8 points from baseline (P < .0001), and a reduction of 2.3 points compared with placebo (P = .05), while the reductions in the ESS score in the 2.5-mg and placebo groups from baseline were not statistically significant.